Dixie Union as Sire of Sires

Dixie Union has emerged as a fairly nifty sire of sires

From a paucity of foals compared to stallions whose sons are all over the place, Dixie Union has emerged as a fairly nifty sire of sires and might become as favorably viewed as a broodmare sire of stallions. Here’s a look at five of his six graded stakes winners at stud:

• Overanalyze (dam by Unaccounted For), leads the list of first-crop sires of 2017.

• Union Rags  (dam by Gone West), is second on the list of leading second-crop sires.

• High Cotton (dam by A.P. Indy) and Gone Astray (dam by Mr. Prospector) are the second- and fourth-leading active sires in Florida.

• Grasshopper (dam by Mr. Prospector) is the second-leading sire in Texas.

There aren’t likely to be more of Dixie Union’s sons coming along, but the only four stallions out of his daughters to go to stud so far are well regarded. They are New Year's Day (by Street Cry), a promising first-crop sire, while Unified  (by Candy Ride ), Mohaymen  (by Tapit ), and Klimt  (by Quality Road ) begin their stud careers in 2018.

Among four of the five Dixie Union sons mentioned above, two are out of daughters of Mr. Prospector, one out of a daughter of his son Gone West, and one out of a daughter of A.P. Indy. In addition, three of the maternal grandsons above are by Mr. Prospector-line sires and one by Tapit. That’s a pedigree affinity, and it serves to show that in the great battle between the dominant sire lines of A.P. Indy and Mr. Prospector, a grandson of Northern Dancer has come along to moderate.

Beyond pedigree to phenotype, Dixie Union and those five broodmare sires, and the sires of the young stallions out of his daughters, are all very similar to each other in terms of balance among the phenotype factors of power, stride, and weight. Indeed, like seems to have met like in respect reducing the tug of war that can result in outliers and genetic confusion.

To carry the assessment of phenotype one step further, Dixie Union was quite like his sire Dixieland Band in physical structure but perhaps more refined. Most of Dixie Union’s sons seem to fit nicely into that niche and pass it along. But one thing both possessed on the racetrack was the most prized of functionalities—solid gate-to-wire speed. 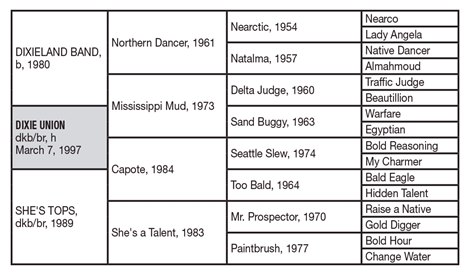 Though not a descendant of that branch, Dixie Union was bred by Herman Sarkowsky who raced him in partnership with Gerald Ford’s Diamond A Racing. Trained by Richard Mandella, Dixie Union was versatile enough to win the six-furlong Hollywood Juvenile Championship Stakes (G3) in July of his juvenile year and the Haskell Invitational Handicap (G1) at nine furlongs and the Malibu Stakes (G1) at seven furlongs among his five stakes (all graded) wins from a dozen starts.

When he went to stud in 2000, he was considered a reasonable prospect, but soon his foals were knocking down graded stakes all over the country. When he was lost suddenly in 2010 few would have imagined his influence would be so prominent as 2020 approaches. That he has mixed well and in most cases succeeded in establishing a reputation for honesty and reliability in his offspring and their offspring, underscores his standing as a mediator in a gene pool that is continually sorting itself out.